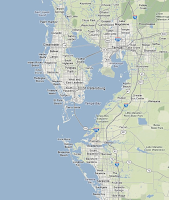 The first movement in my new piece “Tapestry Tampa Bay” seems to sum up my initial impression of life here in Tampa Bay. There are beaches everywhere. There are boats everywhere. The latter is quite understandable bearing in mind that three sides of the St. Petersburg/ Clearwater area is surrounded by water.

The former was, well… unexpected.

The largest and most famous beach is Clearwater Beach. But that entire coastline is full of them. From Sunset beach in Tarpon Springs to Sarasota’s Siesta Key (#1 beach in USA) and beyond, there are miles and miles of soft warm sand. It is a grand spectacle and a luxury we have fully indulged in many times since moving here – especially the beaches on Honeymoon Island.

The opening of my piece reflects the grandeur of Clearwater Beach. Although wide and long, it doesn’t take too much time before one gets either lost or burned, so must retreat to safer quarters such as the Clear Sky Cafe. The same theme is used to demonstrate another beach just as wide and just as long – Indian Shores. Then another, less grand beach such as Caladesi Island (read more about this idyllic isle here). And other similar-sized beaches. Then there are the medium beaches and finally, a couple of spurts of tiny beaches such as the aforementioned Sunset Beach.

So, it’s time for sailing. Although there are many, many more power boats than there are sailboats, there are still plenty of the latter, and my first experience on the waters of the bay was in a sailboat, thanks to our dear friends Dale & Barbara.

The flowing, smooth, calm swaying of gentle waves and a hot breeze across the cheeks is what follows in my music. There are some dolphin sightings as they pop up to say hello, but the music is clearly as peaceful and tranquil as sitting in a wind-powered water-glider in the hands of an expert.

Of course, along the way we pass several small and private beaches along the Bay’s inside edges, so the music eventually combines the beach theme with the boat theme: “Beaches & Boats.”