No Widgets found in the Sidebar Alt! 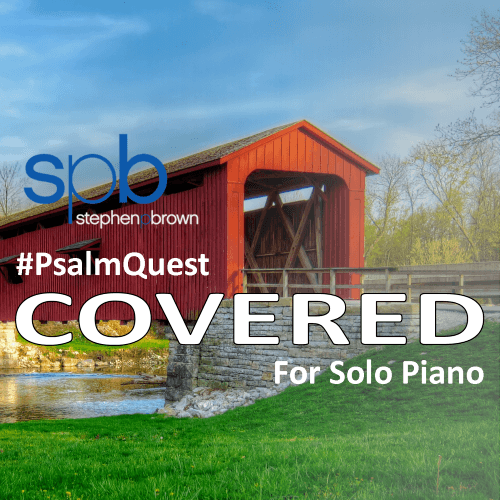 The 3rd composition in my #PsalmQuest, “Covered” is based on Psalm 32

See how this piece is structured

Want the sheet music for free?
Add some constructive composition feedback in the comments below (this is a draft, after all!), and I’ll send it to you.

“Covered” is based on Psalm 32, and is one of my most endearing pieces yet. Composed for solo piano the piece follows the same structure as its psalm – after an introduction, Section A reflects a Prayer for righteousness, followed by a story of life experience (B) and protection (C). In the middle, Section D is God’s voice promising Wisdom, followed by a more energetic tale of experience (B) and protection (C), before ending with a blessing of righteousness (a reversal of Section A’s structure). This piece has been dedicated to a number of my loyal readers and fans, who directly supported a KickStarter campaign that helped create this piece and its audio renditions. Visit www.StephenPBrown.com for other #PsalmQuest compositions.

How This Piece Is Structured

For those of you “Psalmsters” following along with this project, you’ll know that this piece of music is based on Psalm 32. This psalm explains how sin is not eliminated, but covered from God’s view. Hence the title of the piece “Covered.”

The number 3 plays an important part throughout the psalm, and therefore my piece has lots of three’s in it as well. The introduction, for example, consists of 3 notes.

Constructing this piece was most interesting. There are clear elements in the psalm that include instruction, experience and even some words of wisdom from God. It’s funny that the structure of this psalm is more of a mirror than my last piece A Brass Mirror, but we won’t worry about that (Ah, the quirks of ‘artistic license!’)

After the “early morning” introduction, Section A is about forgiveness. It is followed by a lesson from the author’s experience (B) and an explanation of a promise (C). The middle section is God sharing his promise of wisdom (D), and then we get another lesson (B) and explanation (C) before the author shares his happiness and excitement at being forgiven (A).

For some reason the audio elements of this piece are like an upturned pyramid: What should be the highest point of the structure (the middle) is actually the lowest. I just can’t imagine God speaking with a high-pitched voice, so it appears in Covered with a low but clear rumbling.

My wife likes this piece even more than the famous Not Rach 3 which had its premiere in early 2011, just before my move to Florida. That’s saying something. And I’m very pleased to dedicate this composition to some very engaged and loyal fans.

Here is some feedback from an independent review panel of anonymous Reverbnation listeners:

“Have no idea where the song is headed within the first 30 seconds, which keeps me interested and I want to keep listening to find out. At about minute the song gets real interesting and seems like a ballet. It is a great and original piano work. Unique tone and style”

“The piano is very calming and nice to listen to. Reminds me of something I would hear during a ballet. The break and change of tempo from slow to fast gives the song a dramatic feel. This is a great piece of work.”

“I love the calm vibe that it gives, not too harsh but not too soft. The piano is the most romantic type of instrument that there is. While listening to this song it kind of made me sad at first but I kept listening to it and it seem like it was kind of like telling a story. I like the fact that this song does not have any lyrics to it, I feel like the song speaks for itself.”

“Interesting start. ? WOW I love this. It sounds so good for the ears. The tempo is great and it just makes you want to listen. I like when there are pauses and you’re waiting to see how it will keep going. I just love this song soo much I have to give it 10 out of 10.”

“The simplicity, yet slow beauty of the intro makes the listener interested because it ‘s so different. This suddenly leads into a high pitched shrieking of keys which only makes them more interesting. Then it turns into a very dazzling, beautiful string of keys. I love it.”

“I love the slow introduction. It is a little creepy and spooky yet really exciting.”

“Very peaceful piece of music. It was lovely to listen to. It didn’t have any lyrics, however I did not feel it needed any. The music spoke for it self. Very calming and soothing. I would recommend this track. It is very beautiful.”

“Minimalistic is rare these days in music. Its fresh to hear music that relies on one instrument. It started off sounding like my cat just walked over my piano. Then it turned into a beautiful piece of music. This track could be one of my inspirations.”

“Very simple and slow start gives the promise of a big change later on. The experimental nature of the piece is very enjoyable. It almost has a childlike fairy tale quality to it.”

“It kind of reminds me of swan lake and has a calming effect on me.”

“This song really seems to have a very quiet demeanor. You have a really nice classical sort of tone that feels great. I feel that the way that your music comes in is a bit scary at times. I love the way this creeps up. You really seem to have a lot of great direction – sounds bright at certain moments then very dark at the same time.”

“I think that this musical piece is very artfully made. The piano sounds very arresting. The simplicity of the piece also adds to its effect.”

“This is a very soothing song. It brings me into a relaxing state. It has a lot of character and the tune is incredible. This song is one I would mostly listen to when I need to get relaxed from a hard days work.”

“The first few piano notes lured me into this song. The musical piece went from slow and peaceful to something a little quirky and then moved on vibrantly to full-on awesome. I thoroughly enjoyed listening to this piece, and I would love to hear more from this artist. This song is beautiful and I really enjoyed it.”

“It was very gentle and soft, and would be something that I would imagine a ballerina dancing to.”

“This piece starts softly with a lovely piano, before getting louder (forte). The tempo of the piece does starts slow which is a nice treat for the listener. The chord progression at 2:05 has a contrast of positive and negative chords such as major and sharp chords which resonates with the composer Shostakovitch. This piece is really nice and I would definitely like to hear more from this composer”

“A very unusual beginning. Makes you want to listen to see what’s next. Flows more as goes on showing the talent come through. Sounds very sweet and calm. It isn’t something you would usually hear and the tempo changing as it goes on is engaging. Shows contrast and what can be done. Great how it is simply just the piano. Gets more complex as goes on which is great. Beats changing from fast to slow were good. The rhythm is nice how it begins to flow but then becomes sharp and jagged. Shows the different elements of piano playing.”

“Never heard so much simplicity in a song. After a while the song changes in to a better more complex mysterious dark sound and after another simplicity section the song becomes a kind of church state and goes back to its mysterious sound. It sounds like a mix of progressive and classical music. Very experimental and somehow rare song.”

“This song made me feel like I was in a magical fairy tale land and it was an amazing experience to listen to. I liked how the song had many different personalities and attitudes. Even though the song had no words the piano told a story itself. I like this solo piano song a lot. It is out of this world and is so good that it does not need words to get a point or story across. I would listen to this everyday.”

What do YOU think? Add your comments below…