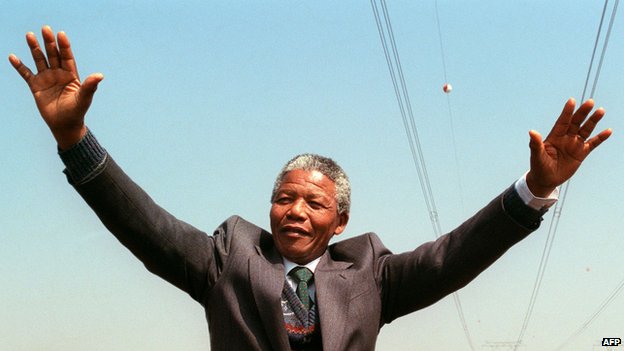 Click here for the BBC News Obituary about Nelson Mandela

Well, we can decidedly close an entire volume of human history: another era has come to a close. Although we still have a 110 year old pianist who remembers meeting Gustav Mahler, we have lost the last bastion of trustworthy social leadership. Nelson Mandela worked for a living despite his royal heritage, and all the while stood up for equality principles before finally leading an entire nation of different peoples into a more cohesive and prosperous future for all. At least for a while. I’m sure being in prison for 27 years imbued much substance that supported his convictions.

When any leader takes a stance on anything, many other people often choose to polarize themselves either for or against them (Conductors are not exempt!), so it will be very interesting to see how South Africans react to the death of Mandela: Will we see unprecedented collaboration or will it be all smoke and mirrors? Will there be continued peace or after a period of global mourning will the old divisions arise? Will there be no noticeable difference because our memories of his actions have faded and been overshadowed by so much else since then?

It is extremely doubtful we will ever see the likes of Mandela, Thatcher, Reagan, and Gorbachev ever again: regardless of their politics, they were people who earned a living in a trade and who learned the ways of the world from similar places you and I stand, and who earned the positions we entrusted them with through hard work and matters of substance. Not funding, slick marketing or family connections.

It is clear that the last chapter in the volume of political honesty, integrity and conviction in social leadership has ended, and as we ride the journey of the internet and corporately funded politics, we are in a new age of human existence that will take us and our leaders lacking in their own substance through an existence never before considered. It’s quite exciting, really!