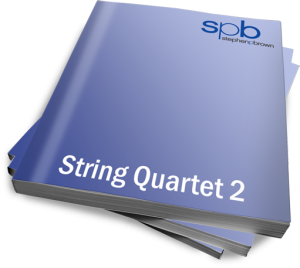 It feels like forever since I published a #PsalmQuest piece, and I guess it was, really – over a month ago! In fact, I finished composing that last piece at the end of September, so it’s really been 8 weeks.

Some of that time was spent resting, but much of it was actually spent re-writing. This was a difficult piece to extrapolate from the recesses of reality and it saw several completely written-out ideas before I hit the ‘delete’ button on the whole lot. But it’s here now, and it has quite a story to it, methinks…

String Quartet 2 (actually, the title was bothersome for quite some time as well, until I realized how simple it could be) is based on Psalm 97 and whereas the Longman/ Garland commentary has it broken into 4 sections, many other sources actually have it broken into 3. I went with C.E.O White’s “A Christian Handbook to the Psalms” and chose three movements for this piece.

The ideas and concepts behind each movement shifted slightly, and although they started out encompassing three of the more easily defined names for God they each ended up as an intriguing mystery.

is about Yahweh. The opening passages of the psalm reflect glory and affirmation, magnificence and revelation. An overwhelming presence. I thought this could be nicely summed up as “Righteousness.” But, is it mankind assuming his own righteousness or it is God as righteousness?

Musically, this movement is rather awkward but it seems to reflect the unstable authority with which anyone declares themselves as righteousness. The main theme is based on the phrase “I am Righteousness. Don’t you forget it!” This was the hardest movement to complete and it went through multiple manifestations.

is about Adonai, the lord of lords, master of all. Somewhere online I found this also summarized as Justice. Currently true Justice in the Western world is a but of a joke with everyday folk moving at different paces to governments which are operating under different expectations of big Corporations, etc, all under the pretense of harmony. But, is it mankind demanding their own kind of Justice like a petulant child, or is it God declaring the fact that he is going to have justice whether we like it or not?

Musically, this is my favourite movement. It has a slow pulse but that hardly means the music is slow. The main melody is based on the aggressive phrase “Justice! I want Justice!” and leads us into a twisting and turning finger-numbing world of dizzying adventures, with lots of teamwork between the two violinists and a rarely-used key E minor, which is actually the enharmonic equivalent of the key that should be used: Fb minor (seven flats, if you know what that means. Er… no thanks).

is about Elyon, which reflects thoughts of strength, the most high, sovereignty and supremacy. In other words, Judgement. Again, we’re not too clear on who is declaring judgement – it could be one of mankind’s follies, or perhaps it is God reminding us that He actually created everything (in the same way that Bill Cosby once said to his son: “You know I brought you into this world, I can take you out!”)

Musically this movement starts with an actual conversation! The first violin shares with us a little reminiscing, before the cello starts a new conversation whilst the viola and second violin try to keep the topic on track (you’ll hear the “I am righteousness” and “I want Justice!” themes reappear). As the cello and viola head off in a new direction, the two violins stick together until one of them adds a comment and the other tries to stop them “Oh no you don’t!” Eventually, though, everyone’s on board, there’s a big “ta-dah!” in celebration, and then we explore Judgement to the end of time.

I take it back – maybe this last movement is my favourite. It was certainly the quickest to be written after the other two struggled to appear.

Click here to get your own copy of the sheet music

Please leave a comment below letting me know what you think, and if you plan to perform it, be sure to add it to this page: https://www.stephenpbrown.com/concerts/

This is a fun little ditty!

Another stab at the traditional Sonata Form, this piece is for a trio of performers: viola, marimba and piano. To my thinking, there is not enough marimba included in the standard instrumentation these days, (click it to tweet it) yet like the saxophone or bass clarinet, it has a great many experts and has become a common option thanks to folk like Evelyn Glennie.

This piece is based on Psalm 102 and although it does not follow a similar structure (the focus of this piece was the structure called “Sonata Form“) I did use the content of the psalm to influence the music.

For example, there seem to be two primary themes running throughout the psalm:

These contrasting ideas helped me create the main and secondary themes: A bustling, fun, busy, strong, emphatic, semi-tangible tune followed by a melody that seems to be a little hidden, unsure, and somewhat unsettling.

Both themes of the sonata repeat in order to establish them in the your mind, and then the development takes off using both themes as the material. However, towards the end there appears to be the appearance of a third more melancholic theme, but in fact it is just a slight variation of part of one of the main themes… can you tell which one?

Click here to get your copy of the score and parts (free for one week only!)

Please share this post, especially with any string players, pianists and percussionists you know – it’s an exciting combination, not too difficult to prepare, and will serve as a very appealing addition to someone’s recital. Thanks.

Setting up a plan of action really does seem to work, wouldn’t you agree?

As the Psalm Setting Quest was formulating, for fun I figured out a way to determine in which order I would use the psalms to compose music to. A few columns, sorts and ranking formulas were added to a spreadsheet and “voilà!” an evenly mixed distribution of each psalm type. There’s actually one psalm type (Prophetic) that has just one psalm in it and I know this ranking system works when that psalm (#50) appears right in the middle of the list, as the 75th piece of music I will write.

An added benefit of using a spreadsheet to create the order, is that due dates could be easily scheduled, and even completion tracking could be setup to be very user-friendly (just check out the stats on the right →). If this all sounds computer-geeky-like to you, just remember that there’s some truth to the old cliché that “music and mathematics” go well together 😉

Well, the crux of it is that I started composing early, and have actually now finished my first piece.

I gathered several sources together to help me determine the content and perspective of each psalm, and according to a Wikipedia entry, the first few verses of this “Song of Praise”

present the heavenly bodies and their movement as a universal witness to the glory of God that is understood by people of every language. The language connects day and night as a continuous presentation. The words suggest energy, strength, joy, and light.

So I zeroed-in on that last sentence, and used it as the composition’s title: “Energy, Strength, Joy & Light.” I created four verses in this piece, one for each of those characteristics, and interjected a chorus using the meditative prayer in the last verse of the psalm. There are moments of ‘clumsiness’ particularly in the Strength verse and the chorus (a rising pattern on the vowel ‘o’ as in “of” – not an easy task to sing well!) which are hints at the psalm’s admittance of man’s presumptuousness when compared alongside God’s creations.

The instrumentation of this piece was determined with a very close outcome, by you. Click here to check out the poll results.

I started composing, wary of contrary motion, harmonic sequencing and melodic interest for all the performers. Below is the computer-generated audio (never an attractive proposition, especially when it comes to representing human voices), and I am making the sheet music available for free for one week only – go and print it now and give it to someone!

Having a plan in place, complete with 7 years’ worth of due dates, has created a great foundation for this massive project. Even though I am now ahead of schedule (I wasn’t even planning to start writing until my birthday this year, but couldn’t wait) there is some sort of sense of accomplishment in checking off a task.

Do you use project plans for your hobby or craft? Or do you just ‘wing it’ and see where it takes you? Let me know in the comments below.

Should my next piece of music be composed for just violin and viola, or should I include a soprano as well?

For more information about this 7-year project, click here.